American English: features of occurrence and use

England and America are two nations separated by a common language.
Oscar Wilde
History of American English
In the 17th and 18th centuries, English crossed the ocean on ships with British peasants and representatives of the petty and middle bourgeoisie. If we could now return to America at that time, we would have met many immigrants who speak Spanish, French, German, Dutch, Norwegian, Swedish and even Russian.

All these people found themselves in a difficult situation – they had to develop land, build houses, establish production and get used to new natural and socio-economic conditions. They just needed a common language – it was impossible to equip new lands alone, they had to unite, communicate and jointly overcome the obstacles that life put before them. The English language became the connecting link between the settlers. 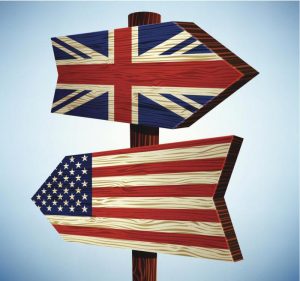 The English language at that time was not homogeneous even within England: strong differences could be noticed in the speech of aristocrats, peasants and the bourgeoisie. Even written English has varied from writer to writer, to say nothing of the representatives of social strata. It was not the refined aristocratic version of English that came to America, but the language of the peasantry and the bourgeoisie.

The settlers faced different problems than the inhabitants of England, they were surrounded by different flora and fauna, history developed in a different way, other things became priority, other qualities were valued in people. The language simply could not help but absorb the realities of life of Americans – and it was changing rapidly.

Today, English is the most widely spoken, but not the only, spoken in the United States.

Difference between British and American English
There are far more similarities than differences between American and British English, since they are talking about the same language. And yet, if you are heading to America, it will be useful for you to know some of the specifics.

In the early days of America, immigrants needed a very simple language to communicate. The already simplified “peasant” English has become even simpler. This is the main difference between American English and British English – simplicity.

Spelling
American linguist, Noah Webster, consolidated in his Dictionary of the English Language the practice of writing -or instead of -our (labor, not labor) and -er instead of -re (English word “In America they write like this:” meter “).

Vocabulary
The differences in vocabulary are largely the result of the fact that the realities of the Americans were very different from the life of the British. The second most important factor is the influence of other languages ​​on English in the United States. The strongest influence was exerted by the Spanish, especially in the southwest of the country.

There are words that are widely used in the US but that cannot be heard in the UK and vice versa. When speaking with a modern American, you can hear English words that have long gone out of use in England.

Grammar
The propensity of Americans to simplify things has had a profound effect on grammar. For example, in colloquial speech, you will most likely only hear the tenses of the group Simple (they used to be called “Indefinite” in schools). The chances that your American interlocutor will use Perfect are minimal. This is one of the main reasons why the British consider Americans to be careless about the language. However, this is not entirely fair: Americans are even more inclined to follow many of the grammar rules that the English often neglect.

Some grammatical differences between American and British English:

more often verbal nouns are formed (to research – to research, a research – research);
the form shall is never used, most often it is replaced by will or gonna (abbreviated from going to);
the words slowly and really are practically not used – they are replaced by slow and real;
from irregular verbs only unnecessary problems, – the Americans are sure. Therefore, many verbs that are irregular in British English have become correct in American English (for example, to spoil).
There are other differences, most of which are also aimed at simplifying the language. But be aware that most of these differences exist only in colloquial speech.
Phonetics
There are differences in pronunciation between American and British English, both in some words and in whole sentences.

Emphasis in words. Some words are pronounced by British and Americans with accent on different syllables, for example address (British) and address (American), cafe (British) and cafe (American).
Sounds in words. There are words in which the pronunciation of the Americans and the British differs by one or two sounds:
ask reads [a: sk] in Britain and [əsk] in America, dance is pronounced [da: ns] in England and [dəns] in the United States.

The sound [t] is pronounced as weakly articulated [d], and the combination of letters tt in the middle of the word in Americans is very similar to [d]. They do not “swallow” the [r] sound like the English, so the speech seems to be coarser, growling. Linguists have developed lists of letter combinations and situations in which the pronunciation of an Englishman and an American will differ. 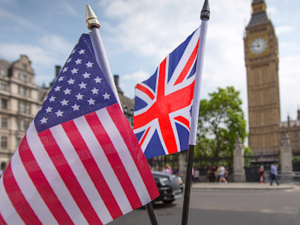 Intonation in sentences. The British use many intonation patterns, but the Americans have only two – flat and descending.
Recently, Spanish has been increasingly influencing the phonetics of the English language in America.

Learning English … Which one?
Which English should you learn – American or British?

The answer to this question depends on why you need a language at all. If you are going to study or work in America, it would be very useful to get acquainted with the peculiarities of American English. Ideally, corporate English language training will be conducted with a professional American teacher. Only a native speaker can feel all the nuances and subtleties, and the differences, as you’ve probably already noticed, are in them. There are no global differences between American and British English.

If you are just starting to learn a language, start with the basics, do not go into details. You need to get at least a minimal vocabulary, learn how to build sentences and express your thoughts – any English language course for beginners will suit you. And then, having basic knowledge, it will be easy to understand the peculiarities of American pronunciation and learn American words.

If you, speaking good British English, get to America, they will understand you. There will be no language barrier between you and the Americans, although, of course, you will not be considered “ours”.